Stat of The Week

Well the hype of the moment still goes on the Miami Heat are winning , Brett Favre has thrown his 500th TD of his career and low and behold the Cincinnati Bengals are indeed a terrible team . In the case of the Heat the bravura that this team would be laying waste to the NBA seems to be complete joke . When you have someone such as Jeff Van Gundy making such asinine claims gives me the impression that as an analyst he ought to be showing sound judgment and not be making the most idiotic statements with nothing at all there to back it up. The Heat’s recently loss to the New Orleans Hornets who are unbeaten and would appear to be a rejuvenated organization under Monty Williams .

Slide show for your perusal.

Chris Paul is leading the Hornets with a great deal of aplomb and he’s being ably abetted by David West. Unbeaten and riding high within the Western Conference along with the Hornets are the reigning NBA champions the Los Angeles Lakers remain the only unbeaten teams within the NBA . Care to ask Van Gundy what he thinks about the Lakers and Hornets at this moment ? I guess he’ll pass on both questions and simply state they are both good teams !

Week 9 of the NFL and I’m now wondering how bad it can literally become for a number of teams within the league . It’s gotten to the stage where parity now becomes a misnomer for what appears to a diluted talent pool and coaching that borders on being insipid , completely agonizing and painful to watch . The Buffalo Bills remain win-less and I’m not so sure that by season’s end we might witness a second NFL team go win-less at 0-16 for the second time in five years. Chan Gailey and his coaching staff seem to be at a loss as to how best to get this team back on the right path. I’m not about to suggest that Gailey be fired but at this juncture there’s a distinct feeling that the fans and owners aren’t entirely happy with the situation as it now unfolds.

The AFC West has become an open race and it appears that the Kansas City Chiefs , Oakland Raiders and San Diego Chargers are looking to make this race a thriller. The Raiders and coach Tom Cable have been a team on a mission . For those who’ve become aghast with the explosiveness of the Raiders’ play in recent weeks then think how their fans are said to be feeling ? For the first time in three years the Raiders have won back to back games and are looking to make it three straight. The Raiders’ offense has racked up 700 yards of offense and unheard of 92 points in two games . Darren McFadden, Darius Heyward-Bey and Michael Bush seem to be the three headed horse that has come about to slay the dragon. Cable now has a decision to make as to which quarterback he wants as a starter for this team . The choices are Jason Campbell and journeyman Bruce Gradkowski _________ care to guess what the choice will be ?

Ah the saga that is the Dallas Cowboys ……. “America’s team” ? Well folks the team appears to be now as popular as the poll ratings of the Congress and the Obama administration combined. With each passing week the woes of this team and its owner becomes cannon fodder for the press and for Jerry Jones the choices are , watch this team continue to implode while a lame duck coach in Wade Phillips continues to lead the team. Phillips for his part has no idea where this team is going and the reasons behind the “free fall” and how best to address the problems. Suffice to say while the intrigue continues there’ll be more to this story that unfolds.

The World Series ended with a thoroughly lopsided series win for the San Francisco Giants. Tim Lincecum , Cody Ross and series MVP winner Edgar Renteria have a number of reasons to be proud. Bruce Bochy wins the team their first title in over 5 decades and the fans are now looking to next season to defend their title. One choice already made by the organization is that the services of Renteria will not be retained and in all likelihood we’ll see the retirement of the two time winning World Series player. For the losing team the Texas Rangers and the ownership group led by Nolan Ryan and Chuck Greenberg it must have been a bitter pill to swallow. Favored perhaps to win the series and with the apparent pitching of Cliff Lee it was believed that the team would be on their way to landing their first World Series championship.

A 4-1 series loss and now the fallout from this all is that Lee becomes a free agent and perhaps the most desired player on the market. ALCS losers the New York Yankees having been embarrassed by the Rangers in that series are now said to be actively pursuing Lee. And though Ryan and Greenberg have stated that is their intention to do their utmost to retain the player one gets the impression that the Yankees led by GM Brian Cashman will move heaven and earth to acquire the player whatever the cost. In all likelihood that will mean making him amongst one of the highest paid pitchers in baseball. That privilege currently belongs to Yankees’ ace C C Sabathia whose seven year $150 million contract now sits atop of the list. Lee who’s represented by Darek Braunecker is known to drive a hard bargain when it becomes common knowledge that one of his clients is the desired target of a team. And with the Yankees venerable financial resources we are now liable to see a bidding war start for Lee’s services between the Boston Red Sox , Los Angeles Angels , Rangers and New York Yankees. Lee has stated that he loves the camaraderie of his teammates and the friendliness of the Rangers’ fans but given the financial security that a $150 plus million contract will no doubt provide, do you get the feeling that this might be the one contest that no one really notices ? Braunecker for his part will seek to drive up the price as he’s often been known to do when it involves one of his more high profiled clients. And for the Yankees this once again goes to show how much disappointment there has been with the inconsistency of their pitching rotation in the postseason .

A $200 million dollar payroll and but for Robinson Cano this team was a complete disappointment in the postseason. No leadership when it mattered most and a group of players where there was about as much synergy and cohesion that one come to expect from a bunch of highly overpaid athletes whose biggest concern it appears wasn’t actually to win but give the impression that they were overly concerned about the Yankees’ legacy. Effort being what it is how the hell can anyone believe that the New York Yankees could actually be favored when they acted with such complacency and a complete lack of competitiveness ? As good as the Rangers were in the ALCS was there any point during the series that gave you impression that there was a chance that the New York Yankees were in with a chance of winning the series ?

Picture gallery for your perusal.

Given what we now know it will be interesting to see how things pan out as both the Rangers and Yankees pit their wits against each other in trying to acquire the services of Cliff Lee. As to the NFL the stories there are ripe for discussion and a battle of opinions from the analysts and fans alike. And for the paeans within ESPN it simply gives them something to talk about and give us their own rather mundane opinions concerning the fortunes of a number of NFL players and teams. Chris Mortensen , Adam Shefter and Mark Schlereth will no doubt still have their lips firmly pressed against the sphincter of Brett Favre as they try to give us the latest on the player’s relationship with his coach and teammates. I guess that will continue to provide us with a great deal of comedic value ? And what of the Dallas Cowboys and their descent into mediocrity ? Is there really anything else that we really need to know at this juncture ? Simply chime in with a comment on this and any other sports related topic that proved to be of interest to you . 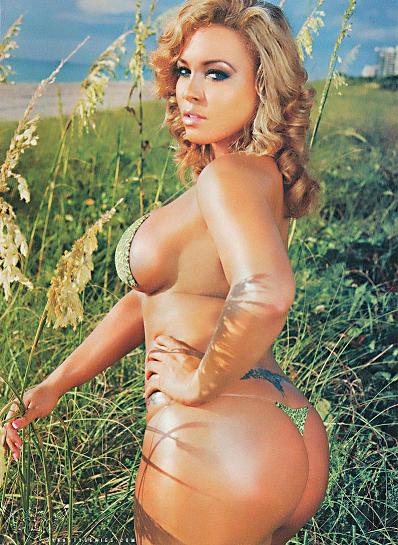 A lil’ bit of eye candy for us all ….. Kimbella